When plants are grown with part of the roots in soil as usual and part in plain water, growth is greatly stimulated. Not only is growth enhanced, but less water is required as well. The following experiment shows the stupendous increase in growth attained using Direct Irrigation Technology. Results shown are representative of the technology, but results vary with cultivar. 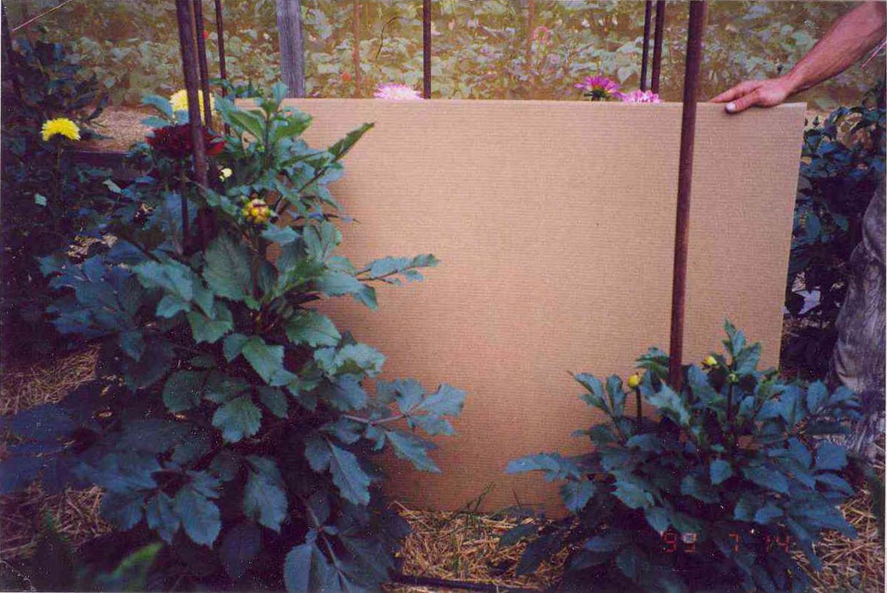 Unretouched photo of dahlias (variety Hendra wildfire) with and without Direct Irrigation. In both cases, the dahlias were properly watered and cared for. The experimental plant on the left shows unusually good growth, quite atypical of dahlias in general, as illustrated by the control plant on the right, which shows typical growth.

Experiment conducted by Professor Daniel Struve at our request. He can be reached at:

Department of Horticulture and Crop Science

The problem with all standard forms of irrigation is that they send the water THROUGH the soil.

This has several negative effects that have been ignored up until now because they seemed unavoidable.:

1. As soon as water touches dry soil, it is drawn by capillary action in all directions. Some goes to the surface. Some goes to the water table. Little goes to the plant. The plant tries to catch it as it goes by, but seldom gets as much as it needs. It is nearly impossible to make certain that the plant gets the bulk of the water applied.

2. When water enters soil it picks up soluble substances, thereby reducing its concentration of water. Plants absorb water by osmosis which depends on difference of mineral concentration between the inside and the outside of the plant, and the presence of dissolved materials in the water reduces the rate of absorption.

3. When water needs are high, as roots absorb water and required minerals, the solutes not absorbed build up around the root hairs & mycorrhizae [symbiotic fungi that assist in water absorption] forming a boundary layer of concentrated solutes which inhibits further water absorption. This is responsible for the wilting of plants on hot day even in moist soil.

One might think that the way to maximize water absorption would be to saturate the soil with water. In most plants (rice being a conspicuous exception) this causes root suffocation and death because soil oxygen is consumed by bacteria and fungi leaving nothing for the roots. Rice gets around this by having tiny tubes that permit oxygen from the air to flow down to the roots. Most plants have not evolved this mechanism, and so they simply die in saturated soils.

This schematic diagram shows the difference between conventional irrigation and Direct Irrigation. 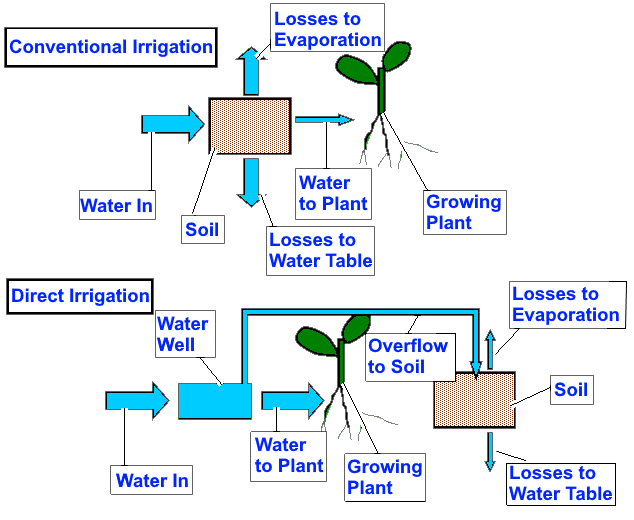 To understand water transport in plants, one must first understand the rudiments of plant physiology. Each cell is surrounded by a living cell membrane and (usually) a non-living cell wall of cellulose. The cell membrane is selectively permeable. There are three basic modes of transport across the membrane:

Processes 1 and 2 above are delicately controlled by the plant to admit what the plant needs and exclude all else. [Of course, this selective control is not perfect, and some unneeded solutes are admitted.] Water is admitted principally through tiny pores called aquaporins, which are so small that only water molecules can pass through them. Other solutes are admitted through highly selective ion channels that each permits only a single ion such as potassium (along with analogs from the Periodic Table) in controlled quantities. There are ion channels for potassium, calcium, magnesium, etc. (See reference)

In the usual situation, a root is located in soil, which has at least some water in it. Roots absorb water through root hairs and associated fungi called mycorrhiza. (Mycorrhiza will be ignored in the sequel because, for our purposes, they act as simple extensions of the root hairs.) 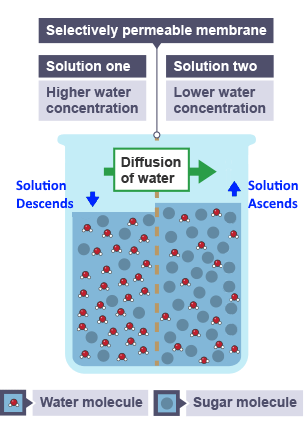 Here the effect of a solute (sugar in this case) is to "pull" water from the pure water compartment into the compartment containing sugared water.

In the case of plant roots, each root is provided with a large number of cellular protrusions called root hairs which extend from the root into the soil as shown here:

During a hot day, the solutes that are not absorbed by the plant and are left behind concentrate around the root hairs forming a boundary layer of concentrated solutes as shown in yellow here. This layer, being more concentrated in solutes than the rest of the water on the surface of the root hair, inhibits absorption in a process that is called induced osmotic resistance. The boundary layer is produced dynamically and limited by diffusion, and tends to vanish with time. The effect of the boundary layer is most noticeable during hot conditions and is the reason why plants will wilt on hot days even in moist soil.

The way around this problem is the send the water directly to the plant, bypassing the soil. This is not hydroponics, which does not use soil at all. In Direct Irrigation Technology, the grower deploys a water reservoir beneath the plants.  As roots grow into the soil, they are attracted to the water reservoir and the roots enter it. When they touch the water, they form a separate set of roots, the water roots, in addition to the usual soil roots. The formation of two sets of roots is one of the unique features of Direct Irrigation Technology. The water roots undergo a startling transformation: they lose their bark and metamorphose into thin, unbranched, spaghetti-like strands that emerge from a common point. The water roots, although submerged, are not suffocated because they are in properly aerated water, not in saturated soil loaded with bacteria and fungi. In saturated soil, oxygen is removed from the soil solution by the biological oxygen demand of bacteria and fungi. In Direct Irrigation, there are very few bacteria and fungi in the water, and the water is kept in contact with the air.

As the plants absorb water from the reservoir, they increase the concentration of solutes in the water reservoir. If this is permitted to go on indefinitely, the water in the reservoir will grow increasingly contaminated with solutes, decreasing the concentration difference, which will halt further absorption.  Therefore, periodically, the water reservoir is replaced with fresh water, forcing overflow and moistening the soil. This flushing process moistens the surrounding soil and eliminates the need for overhead watering. In case of brackish water, instead of being flushed, the water reservoir is drained of water containing excess solutes. This salinated water is then disposed of into the ocean where it will do no harm. The entire cycle of filling, flushing or draining is, of course, automatic.  The result of this process is rapid growth with huge water savings.

One key factor is the use of demand feeding of the plants. As the plants absorb water, the level in the water reservoir goes down. This activates the float valve which refills the water reservoir to its proper level. There is no guesswork. The plants control the water flow into the water reservoir by this simple feedback mechanism. No water is wasted by giving plants water that they do not use under the current conditions. Instead, plants always get exactly as much water as they need under dynamically changing conditions. This minimizes water use.

There are at least four configurations in which Direct Irrigation can be used: 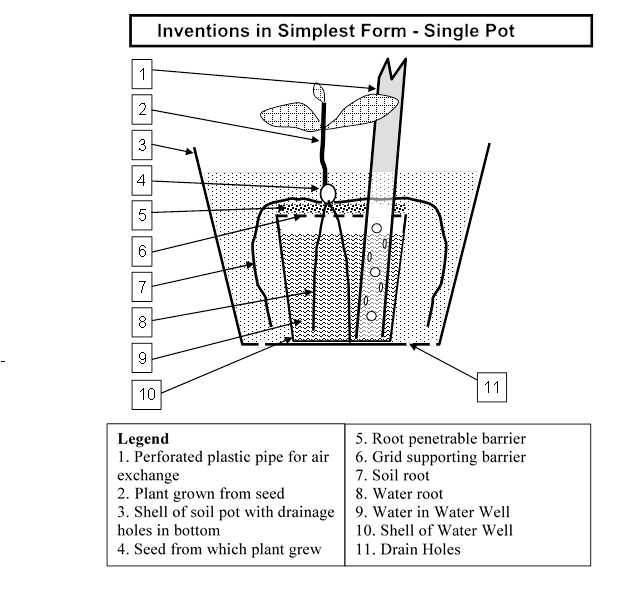 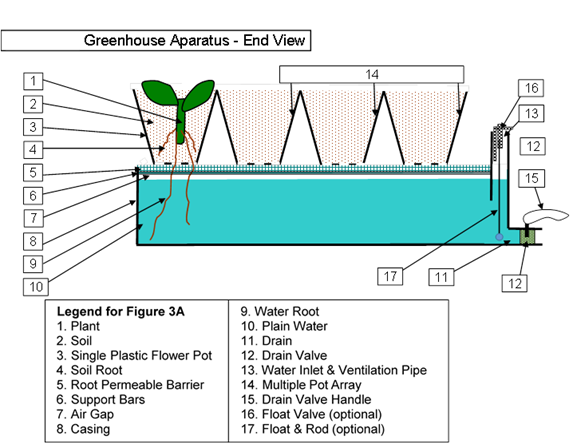 3. Plastic pipes buried in the ground for row crops; 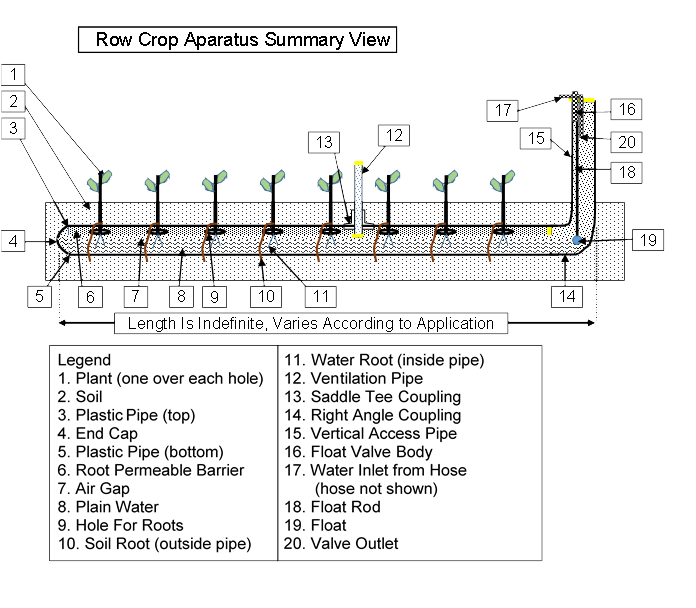 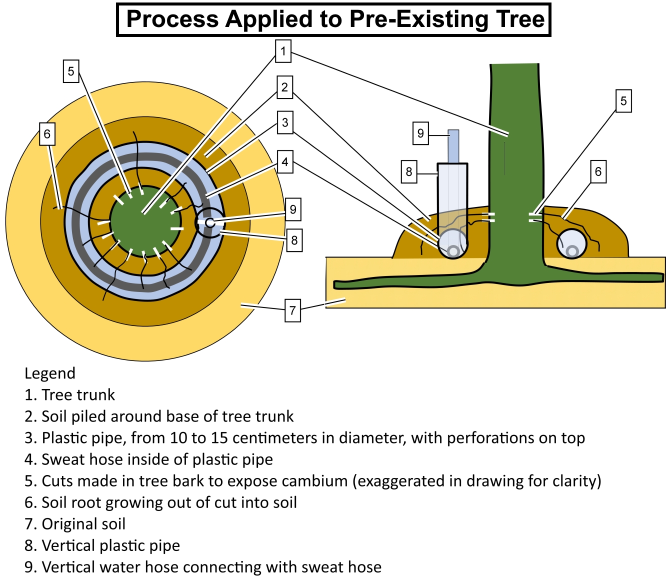 Leaves are the photosynthetic organs of [most] plants. They use the energy from sunlight in their chloroplasts to split water into hydrogen and oxygen. Carbon dioxide is the precursor for photosynthesis, the process by which plants convert light energy into chemical energy as sugar. The hydrogen is combined with carbon dioxide to produce the fundamental food, sugar while oxygen is released into the environment.

1. To provide a medium for the chemical reactions of life to take place.

2. To carry dissolved nutrients from the soil via the roots.

3. To prevent overheating of the leaf. 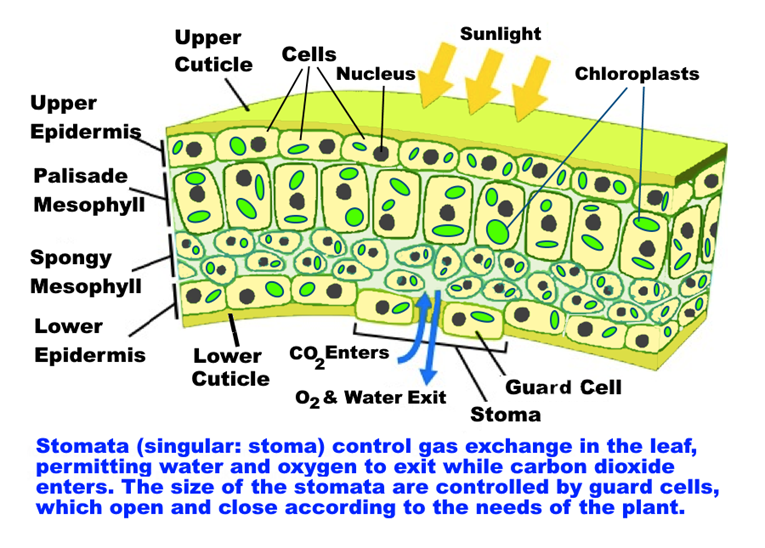 Leaves have tiny holes, called stomata (singular stoma) for gas exchange. Gas (including water vapor) can enter or exit the leaf only through the stomata. (To be precise, there is some transfer elsewhere, but it is small in almost all species.) The stomata permit oxygen from photosynthesis and water vapor to escape and allow carbon dioxide to enter. Evaporation of water cools the leaf.

Evaporation of water must be limited to prevent damage and death by desiccation. There is an inherent conflict in these two functions. The stomata should be fully open to maximize carbon dioxide intake. The stomata must be nearly closed to minimize water loss by evaporation. Clearly, the stomata must reach a compromise, which is suboptimal for both. This compromise results in restricted intake of carbon dioxide and restricted water loss, resulting in excessive leaf temperature. The result of these two conditions is the destructive phenomenon of photorespiration in which sunlight actually causes the photosynthesis cycle to reverse and consumes rather than produces sugar.

Plants grown using Direct Irrigation Technology that are intended for planting in ordinary gardens need to be gradually acclimated to this environment by reducing the amount of water supplied via the System until the plants have adapted to life without the System. This takes several weeks.

Underground pipes for row crops must be level, otherwise water flows to the lower end and the plants located over the upper end are not watered. On extended fields in non-flat land, contour farming methods must be used.

I invite any interested parties to give it a try. In three to four growing months, you will see a spectacular increase in growth while water use will be reduced. Try it. I will be happy to provide detailed instructions.